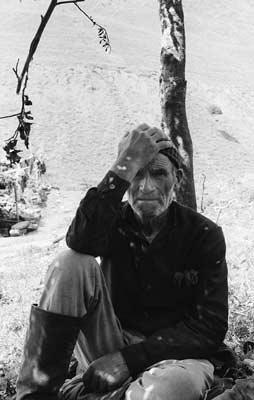 Some things are very difficult to understand. Russia defeats and destroys a complete region, and the world keeps silent, politicians send their congratulations to the murderer Putin for his victory at the elections. Those, who were very engaged in defeating Serbia in Kosova to save freedom and humanity last year, are silent now. Where is the Moral? Are there any limitations for conciousness, for moral?

What disturbed me very much, what I cannot understand at all, is that the elections took place in Chechnia as well, that those victims of the war, who lost everything, who suffered horribly, elected Putin, their own hangman. I feel helpless, I do not understand that at all

But there are also blissful moments. Looking for information on the elections in Chechnia, I found the website of the russian photographer Igor Palmin. Palmin travelled in Chechnia for many years and he presents very impressive photos, combined with very reflective thoughts on the destiny of this small population. His Chechnia-Projekt gives evidence in a very impressive human way. That is a great relief.

Last but not least, Igor Palmin got a name because of his photos, portraits of nonconformistic artists in the 70s. 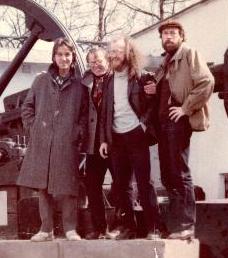 DOM in Moscow presents a phantastic program for April 2000:

One festival with / for Dmitry Prigov, the musical poet, the 4th SKIF-Festival: in Memoriam Sergey Kuryokhin, now in Moscow, not in New York, and Alternativa, the renowned festival of new music, organised by Dmitry Ukhov.

In memoriam Sergey Kuryokhin: I found a very old photo in my archive which I was presented many years ago in Ekaterinburg: from left to right, Sergey Kuryokhin, Sergey Letov, Genadij Sakharov, a music journalist, and our friend Dimidov, a Jazz-Enthusiast. 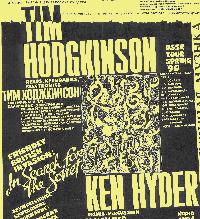 Tempora mutantur, nos et mutantur in illis - times are changing and we follow! This old saying was never more true than in our times, when the old powers broke, economic systems collapse, countries get divided or unified...

It is only ten years now, that Tim Hodgkinson and Ken Hyder undertook their first USSR-Tour ... 'in search of the soviet shamen' was the name of that expedition, which took them to Khabarovsk in the far east to participate in the Jazz on the Amur-Festival.

Boris A. Podkosov, a neverresting jazz-promoter from the far east suggested me to start a web project on that historic event and I will do it. Why not, there are quite important historic jubilees nowadays: 200 years of Suvorov's crossing the Swiss Alps, 10 years of Tim's and Ken's crossing the Ural, the Jenissei, the Lena, the Amur...

We are collecting the material in the moment..

But have a look: In Search of the Soviet Shaman! 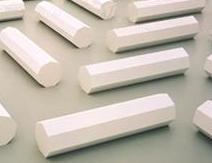 I had the chance to meet this great, strong work of art after 7 years for a second time, and I was even a little afraid. At the first time, it had a very strong effect on me, just like Barnett Newman's Who is afraid of Red Yellow and Blue. Will this effect still exist, will I feel something or will the magic be lost?

To my great relief the meeting was very intense again, I felt calmed, supported and happy. A piece of art will always offer a dialogue with the spectator and, referring to the actual situation and experiences, the spectator will find different sensations every time, but the art will not be lost.

And The 2000 Sculpture is a piece of art. Please read, what Angela Schneider wrote in the catalouge, in german language: Walter de Marias Musik. Walter de Maria creates music as well ...

One more time, the author succeeds to allow every person in this novel his / her very own enigma. I haven't finished the book yet, but I hope it would not end...

One more time a very impressive portrait of a russian woman...

Alexei Aigui told me that his CDs can be ordered online now at www.cdmail.fr Just enter the name Aigui in the form and you get listed all available CDs.

My dear friend Trudy Morse will celebrate her 81st birthday April 8, 2000 and I send her all my best whishes. I am happy that she will come with us to Russia in summer to the festival at Interstudio, Carskoe Celo.

Last year there was a special Birthday-Celebration- and -Congratulation-Page at Avantart, this year I send her virtual flowers and a virtual cake.

There are not so many new pages at Avantart at this time, but that doesn't mean that I was lazy :-)

I worked on a prototype for a photo-installation. This project will be exhibited at the Summer-Festival in Carskoe Celo in July. The topic is the way how foreigners look at russian everyday-details, confronted with literature, let it be excerpts from novels (Tolstoi), short pieces by Charms or important historical texts like "The Woman and the Socialism" by Bebel or "Phänomenologie des Geistes" by Hegel.
Both philosophers had a sharp influence on russian history, as we all know... :-)

This project is in german language and it will be translated to russian, but maybe even you english speaking people take a short glance at http://www.mueller-goedecke.de? May be you like it..