The International Summertheatre Festival 99 in Hamburg presented, in cooperation with Aarhus Festival, Aarhus and Dansescenen, Copenhagen, the First Performance of One. Second Hand by Sasha Pepelyaev's Kinetic Theatre from Moscow.

What is Sea Cabbage? this question and other absurd ones belong to textphragments by Lev Rubinstein and Alain Robbe-Grillet (both very existential and sometimes absurd poets), murmured by the dancers, who did not wait for any answer. They were busy, running, jumping, embracing and leaving each other, forming new groups or walking alone on the margin of loneliness, isolated or integrated in the group.

Absurd texts, grotesque acrobatic movements, perfect choreography, impressive images arose ... accompanied by the more than congenial music of Alexei Aigi who took part in the performance, playing his violin to tapes with music of Ensemble 4'33.

Pepelyaev's work was highly praised in advance, claiming that this work proofs that modern dancetheatre exists in the East as well, and as far as I can admit, they fit the standard. But they add some more flavor to the soup: postmodern russian texts, contemporary dance techniques and traditional russian dramatic style.

Let me admit one criticism: the company does not differ from most of the modern dance theatre performances I have seen in the last years: great techniques, strong ideas for movements, but no red dramatic thread... action follows action, cut by cut, it is more a "number show" presenting the repertoire than an inscenation ... they pretend to tell a story but they only present short flashes from a story... and for that, 75 minutes are too long, maybe... 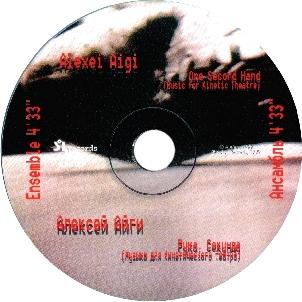 Alexei Aigi published the music for One. Second Hand by Solyd Records, Moscow.