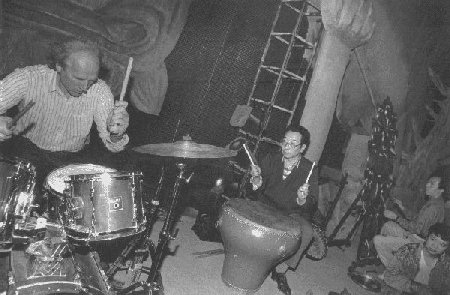 Vladimir Tarasov had to come to China - and he did. At the 1994 Beijing Jazz Festival Tarasov played with his old friends, the German musicians (Heinz-Erich Gödecke, Stephan Kersting). Again he was a success, like during similar festivals held in Europe, Russia or the United States. But that was in stage, while it was backstage where he made friends with the Chinese percussion ensemble, the Thundering Dragon. Seven drummers and cymbalists headed by their instructor Tiaen Xi (they work in the Beijing Central Opera as well as the Chinese State Broadcasting company orchestra) must have heard in Tarasov's music what they could never hear before, neither on stage nor in the recording studio. What they wanted to hear but what they couldn't.

The Thundering Dragon was striving for the new percussion music, while Vladimir Tarasov headed for tradition, so this is why they met. According to laws of universal harmony their paths had to cross, and they did - on the margins of the Beijing Jazz Festival.

Partners and associates who even never thought of such an encounter, nevertheless, turnded out to be quite ready for it. The tunnel was being made from the both sides due to common long-standing efforts. The seven "thundering dragons" as well as the "thunderous" Tarasov were playing together - for themselves, for each other, for a small, festival - unlike, audience, for the sake of a unique musical experience and, finally, for us who now listen to this CD.

An encounter of the two different cultures is always interesting. It is still more interesting when the two cultures distant in time and space meet. For distant doesn't mean alien. Tarasov plays as if he were a medieval emperor Ming Huan's "pear orchard conservatoire" graduate, but a graduate who is well aware of the ancient and Modern European music. While his Chinese colleagues are taken away by the new improvised music, nevertheless, never forgetting the old ones. This is the music of the two origins, the music of the eight winds, the music of the five colours....

A Chinese ragtime, which is a jazzy idiom for "nonsense", from now has got the right to live by itself. It is materialized in sound; the real art, talking all previous and seemingly insoluble contradictions apart, makes up the new ones, though....