I met Urna Chahar-Tugchi and her german husband Robert Zollitsch at the Jazzfestival 94 in Beijing. Now they live in Berlin, so we have a chance to enjoy her concerts more often.

Urna Chahar-Tugchi talks about herself and Tal Nutag (Mongolian: grasslands)

My homeland is the Ordos district, a high plateau in westen Inner Mongolia belonging to China. It was there that I was born in the last winter month of 1968 into a humble family of livestock farmers. As a child I looked after lambs on the sand dunes with the neighbouring children. Sometimes we lost track of our flock whilst playing. So to gather them again we tossed lumps of sand into the air. In this way we sometimes caused whole sandbanks to collapse. Later I looked after calves in the plains fo Shirdegiin Tsaidam where the thick grass grows tall. And so the first ten years of my childhood quickly passed.
In my country it is customary for children to attend a day-school when they reach the age of ten. My parents now expected this of me. I got on my horse, presented myself at the neighbouring house-hold and began to learn the Mongolian alphabet. Where I come from, 'day-school' means a particuliar family where all the local children gather to receive instruction in writing. Later on I went to a 'middle-school'. It was too far away to ride to every day, and so from then on I only got to visit my parents for one or two days every fortnight. 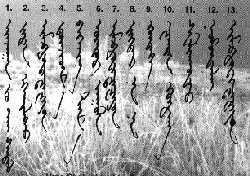 The school was run with with the strictest discipline. Each morning, as soon as the sun rose, we had to get up out of our warm beds and go to lessons. I twas no longer the bleating of sheep and lambs and the lowing of cattle which awoke me bit the clanging of the school bell.
The years passed quickly. Soon I finished 'middle-school' and set my thoughts on studying. I got in the train - for the very first time in my life - and travelled to Shanghai. There I was, a simple twenty-year-old Mongolian peasant girl, wanting to matriculate at the conservatoire and unable to speak a single word of Chinese! So I diligently learned the language, took lessons on the chinese 'Yangquin' (hammered dulcimer) and was eventually admitted in 1990 to the Institute of Traditional Chinese Music at the Shanghai Conservatoire. I was fascinated by the student life and getting to know was still for me the foreign Chinese culture proved to be an important experience.

During my studies of the basics if music-theory I returned more and more to my Mongolian roots. At the same time I realized that to enable myself to use the musical traditions of other countries in a creative way, I had first to get to know the international music cultures better. I have been singing the folk songs of my homeland Ordos in public since 1994. Our life moves in with each new day, and I consider that our national arts should also continue to develop. The folk songs I interpret here are not accompanied by the native folk fiddle and 'Shanz' as is usual, but by the Bavarian zither and the classical guitar. A novel and striking effect is thereby produced.

The Ordos district has been dubbed the 'Sea of Songs' by its inhabitants. I am very happy to have been born in this particuliar part of the world. In my homeland is no-one who doesn't know our folk music. Its range is endless and the songs are sung everywhere - in the open air, tending the cattle, whilst riding. So it was that I grew up in a sea of wonderful melodies, fairy-tales and legends.

These were my teachers and from them I learned the art of singing.
To acquaint you with the songs of my distand homeland I present you with my first CD. It is my ardent hope that in listening to it you may get an impression of some of the colours and scents of my homeland.

Robert Zollitsch, born 1966 in Munich. First zither lessons at the age of eight. Studied musicology and music-theory in Munich and Berlin. Performed as soloist in concerts in Tallin, , Berlin and Florence.

1993/1994 received a DAAD scholarship to study the Chinese zither "Guquin" in Shanghai.
December 1993 production of CD "Shesh" with ensemble of the same name.
January 1994 production of CD "Zanskar - Solos and Duos for Zither" in collaboration with Oliver Kälberer (KlangRäume CD 30130).
1995 composition scholarship of the government of Berlin / Brandenburg.

Urna has her own homepage now: www.urna.de

This file has been updated August 15, 2000.
© I took the potos from the CD-Cover and the text from the CD-Booklet. So all copyrights ly by the authors and photographers, who are mentioned in the CD-booklet. As this page is a surprise and present to Urna, I didn't ask her before, but I think, she will agree with the publication of this page.
All further responsibility lies at my side.