The Arkhangelsk Jazz Festival, as it is one of the most renowned festivals in Russia, if it is not the first one, depends on a lot of financial support and sponsorship. And as everybody can imagine, most of the budget is spent, before the festival starts: for equipment, travel costs, accomodation and many more. So it is really a hard blow, when the authorities decide 2 days before the festival to stop the financial support and not to give any rouble. I still don't know how Vladimir Resitzky managed to run the festival, because we were offered once again a great hospitality.
Quite another audience than in Vologda: fine dressed, interested people listened to the opening speech which was held by Alekcej Bataschoff, one of Russia's jazz pioneers.

And than the music started: the Chamber Orchestra Arkhangelsk opened the festival with music written by Shostakovich.

This is one russian speciality: they don't stick so much to the labels, you will not hear only jazz on a jazz festival, the music is important, categories are helpful but not restricting.

The program was really mixed: after the Shostakovich piece Aleksej Aigi presented his ensemble 4"33': young musicians, who stretch their musical horizont from Shostakovich to Rock music, from Bela Bartok to Frank Zappa. Aigi, a violin player, who is the son of Gennadi Aigi, a well known poet, is a member of the moscow musicians community for some years now and his ensemble can find its place.

Daniil Kramer from Moscow presented rather normal, well tuned piano jazz and the Juri Kuznezow Duo, Yuri Kuznezow and Tamara Voeba from Odessa presented Night Club Jazz at it's best, but a Night Club would have been a better place for this music for sure. Later at night, they repeated their program in the night club RELAX and had great success. 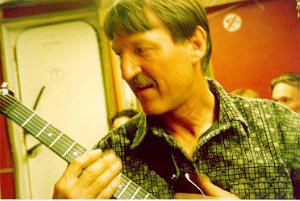 The Heinz-Erich Gödecke - Project found a better audience for their performance than in Vologda. Here sensible sound- and light-technique helped to express the archaic impressions which they created. So it was no wonder, that this project, which could seem strange and exotic to the audience at first, found an attentive and concentrated publikum. An interesting russian-german project, which will be continued in the future.
The last gig of this long evening was a quintett formed by Vladimir Tarasov, Heinz-Erich Gödecke, Stefan Kersting, Reinhard Hammerschmidt, and Vjacheslav Gaivoronski. First, Resitzky was to join this band, but as he had so many trouble as organizer of the festival, he was not in the mood to do so.
Last not least we got wonderful jazz guiding us into the night.