Let me give a short introduction to these beautiful islands in the White Sea, taken from the book Solovetsk Islands, Symmetry of Spirit by Oleg Semenenko, Text by Yevgeny Krylov, published in Petrozavodsk 1994: 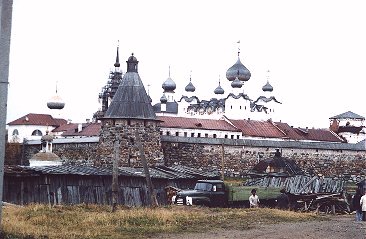 The Solovetsk Islands (Solovki) are an archipelago situated between 64°57´ and 36°17´ eastern longitude on the point of entering the White Sea Onega inlet in the Archangel region.
Their area takes up 347 sq. km. The archipelago consists of 6 comparatively large (Bolshoi, Anzer, Bolshaya and Malaya Muksalma, Bolshoi and Maliye Zayats) islands and scores of smaller ones.
It's been established that the settlement of these islands began in the early and mid-third millenium BC. The Solovetsk Monastery functioned from 1429 - 1436 up to 1920.
For centuries the Monastery owned huge territories in Belomor'ye; it was the religious, economic, political, ideological, cultural and military center of the region. 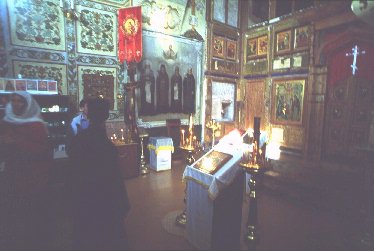 From 1923 to 1947 Solovki was the Northern Fleet's training squad base and from 1942 - 1945 The Navy Marine School.
1967 marks the birth of the Solovetsk historical-architectural and outdoor nature museum. From 1960 work has been going on to conserve and restore the Solovetsk Monastery historical-architectural monuments.
1990 witnessed the revival of the Solovetsk Monastery's activities. The islands's nature is inimitable and, besides, there are over 180 unique immovable monumentums of archology, history and architecture on it.

What the author withholds: Lenin changed the monastery to a Gulag in 1923, which was called SLON (=Solovetski Special concentration camp). Thousands of prisoners were brought to the island to work in the wood industry, thousands died here. The monastery served as prison as well as other buildings spread over the islands. Solchenitsyn's book 'A day in the life of Ivan Denissovich' is situated here. 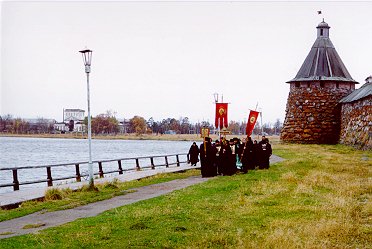 The monastery was founded by the monks Sawwatij, German and Zosima in the year 1429. We were lucky to attend a service in the monastery's church in honour of these holy men, which was followed by a procession around the monastery's walls.

In the second half of the 17th century, the monastery became the headquarter of the Raskolniki, opponents to the clerical reforms of the patriarch Nikon. Later it served as a prison, Father Silvester (advisor of Ivan Grosny, Iwan the Terrible) or Pjotr Tolstoj (favourite of Peter the Great) were imprisoned here beside many other unlucky people. In 1990 the monastery was inaugurated again and today 25 monks live and work here.

More than 5 thousand years ago, man lived on these islands. Some traces of their existence can still be found. On one of the islands a labyrinth can be found. It is reconstructed on the main island. 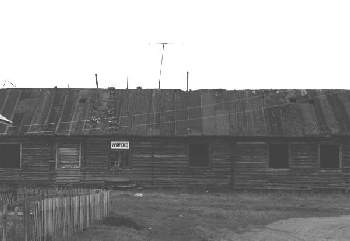 A milk shop on this island 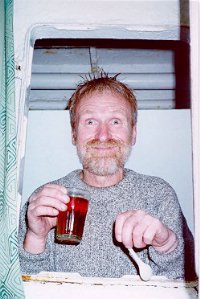 Back on the boat, we took a rest and enjoyed hot tea. The sauna on the ship was heated and some of us exposed themselves to the high temperatures.

Here you see the relaxed organisator of this trip, Vladimir Resitzky.

At 4:00 pm the boat left the islands and brought us back to the main land.

This evening's jam session lasted until the morning, there was no chance to stop Izmailov, Kuznetzov and the other musicians. So the night was short. Cornelia, Stefan and Oleg were invited by the crew to inspect the whole ship, to listen and to record the sound of the radio system.
We tried to go to bed early, because our ship was scheduled to arrive Severno Dvinsk at 5:00 a.m. and our plane to Moscow was scheduled to start at 7:00 a.m. So the last night on the boat was a short one, but still I didn't know what surprise was waiting for me in Severno Dvinsk.

The White Sea presented us some more surprises: a beautiful Northern Light , the first one I ever witnessed, was to be seen on the sky for some hours. First, everybody of us tried to remember what we had been told in school about this phenomen, and to our shame, nobody remembered exactly. But then, we gave up and enjoyed this quiet and majestic wonder.

A heavenly spectacle was happening and I felt my soul searching for metaphysical consolation.

The next surprise was to be seen in the water behind the boat: white stars were swimming in the turmoiled water, lightend by the lamps of the boat and for this phenomen we found an explanation: big medusas, also called jelly fish. 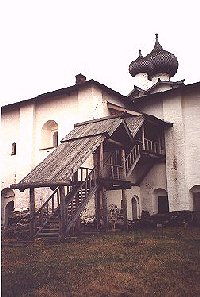